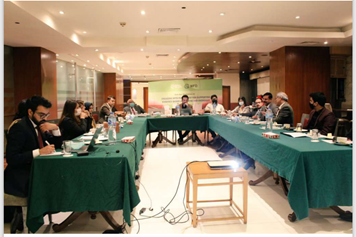 Avari Hotel, Lahore- Anthro Insights in collaboration with Westminster Foundation for Democracy (WFD) organized a one-day workshop for CSOs, academia, and think tanks on “How to engage with Parliament for supporting evidence-based policymaking”. Mr. Zafarullah Khan former Executive Director of PIPS and chair of Parliamentary Research Group (PRG) opened the first session ‘Importance of evidence-based research in Parliament’ with the question of ‘why the Parliament of Pakistan has not been engaged with CSOs in the past’. He also highlighted that Pakistan’s Parliament requires robust coordination and linkages with institutions and experts for carrying out its functions. CSOs having direct and first-hand knowledge of citizens’ needs and issues have the protentional to contribute to parliamentary working.

During the second session ‘Tools for engaging with Parliament’, Mr. Zafarullah Khan elaborated utility of various available tools such as public petition, public hearing, consultation meetings, press gallery, and invitation to relevant meetings/workshops for discussing issues of public importance. With regards to media engagement, he also mentioned that the Parliament house has a designated space (press gallery) through which authorized media staff may report on house matters and debates. Other initiatives taken by the parliament for engaging with CSOs were also discussed such as Women Parliamentary Caucus (WPC), Sustainable Development Goals (SDGs) Secretariat, etc.

The final session of the workshop was led by Mr. Mujtaba Zaidi, technical expert for formulating a pool of experts at Standing Committee on Climate Change (ccc) and lead consultant for WFD’s initiative of promoting evidence-based policymaking. During this session, Mr. Zaidi shared the CCC process of developing public engagement tools available on the committee’s website. These include public petitions, public hearings, and a pool of experts. This session was followed by an interactive discussion highlighting challenges faced by CSOs for engaging with the Parliament and generated recommendations that may support strengthened linkages among the same.

Meeting with Working Committee on Acid and Burn, WPC KP